Well it’s that time of year again when bears come out of hibernation and I become a klutz!
Made a trip to town today to deliver a couple of Banty roosters to new homes and make a milk delivery. On the trail in I caught movement in the corner of my eye and slowed down (stopping is neither easy nor advised on this ice as getting restarted in a hurry could be a problem ) what I saw was a young black bear taking a stroll. He looked like he had wintered well as he was pretty fat and wasn’t in a hurry to go anywhere. Glad though I had my sidearm on just in case.
My trip in from there was uneventful and my first stop was to see my friend Mary, the recipient of one of the ugly little Banty roosters. She of course thinks he’s beautiful and I’m happy he’s found a home but never the less he and his brother are homely little fellas! My friend Maura was there and she gave the other little beast a new home. Bless her heart she is such a sweetheart and deep down I think she believes he’s ugly too but felt sorry for him. I left Mary’s 2 roosters lighter and with a bag of salmon filets for several meals! What awesome friends I have!!!! 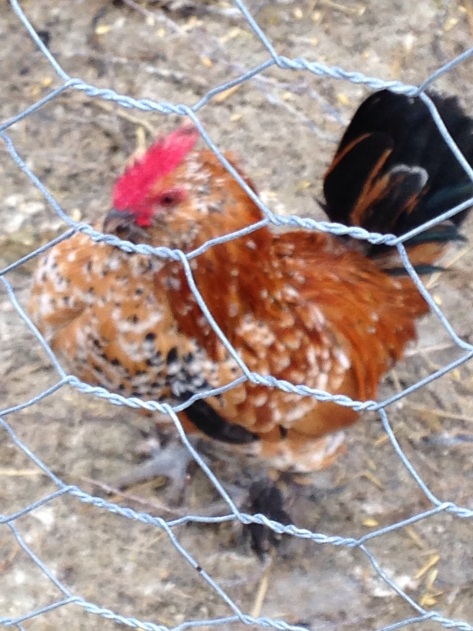 My next stop was to deliver some milk to my friend Carly who surprised me with a pair of earrings that are beautiful. They are scrimshaw with a moose head on each and such a thoughtful gift. She said they reminded her of my little farm.

After a stop at the post office I was back on the road again heading towards home and had the urge to stop and see Shana who is always good for a giggle. Shana can make the
Most mundane things exciting and is quite a storyteller. I was met in the yard by a friend of hers Dani who was burning spruce boughs and sending out smoke signals-new friend!!!!! Yay!!! She didn’t bat an eye when I got out of the pickup and said “hi, I saw your smoke signal” she just giggled and said hello then directed me to Shana who was hiding in plain sight behind the smoke screen. After a few giggles and chatting about this beautiful weather I was off again and headed home. That’s when the trouble started.
I turned off the main gravel road onto the trail, stopped and put the pickup in 4 low and proceeded slowly across the ice. All was going well until I was suddenly going sideways down an incline a sharp right ahead and deep ditches on each side. Knowing I was potentially in much trouble I said a quick prayer that went some thing like this “oh God, Oh God-do something please! The pickup rear end swung around as if righting itself and then it was going straight…….the road wasn’t though. In a split second I found myself literally teetering on one wheel and the underbelly on a chunk of ice. Worried I was going to roll I exited said vehicle by swinging the door open and landing on my backside.
I managed to right myself then walk back to the gas plant where two very nice men came to my rescue with a big beautiful loader. After they chained the truck to the loader and made sure it wasn’t going to roll they had me crawl back in, over the gear shift and other things that can get in the way of boots with ice cleats on them, I finally got in the drivers seat and got it in nuetral. It was about this time dear hubby arrives (I had called him to let him know I was a little delayed. He pulls up and remarks-boy you almost done it that time! Ya think? Was the only thing I could respond with. He also made a couple remarks I chose to ignore about the truck seat and potential stains but that’s as far as we are going with that.
Those nice fellas got me out of the ditch and once again I was on my way. 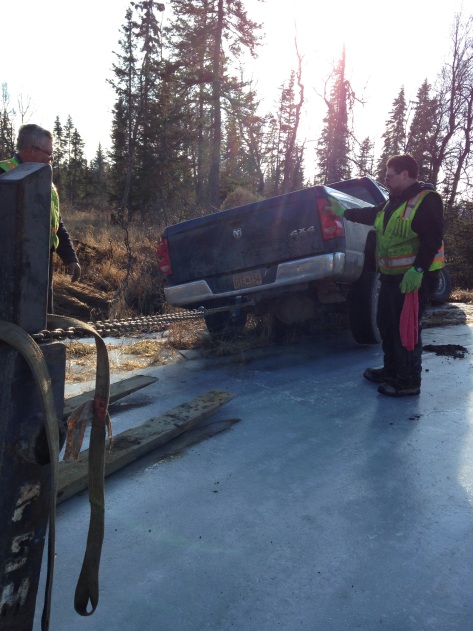 I guess without a little adventure life would be boring and hey-we all need to test the old ticker once in awhile and apparently mine is fine once again as it’s still thumping.
All in all a good day and even though it had a couple of challenging moments God was once again watching over me and I am thankful for his blessing me with safe travels.

3 thoughts on “Oh the adventures begin…..again!”