Today was a very busy day!  My day started out at 4 a.m. which is really early considering the sun doesn’t rise until 9:44 in the morning but with the coffee pot perking at full speed I conquered my sleepy eyes and persevered!  Some of you know I was contacted by A Taste of Home magazine and they had chosen one of my recipes for their cookbook to be published in August.  Now I am not quite sure how they got this recipe as I don’t recall submitting but never the less I was honored to even be considered.  The requested that I submit photos of myself and my family enjoying the veggie breakfast casserole and I responded (a bit saddened at the prospect it would be a deal breaker) that I would be happy to submit photos of my family but would not inlcude any of myself that could be blownup clear enough to see as I still feel hideous after the accident that broke my facial bones, took my teeth and left me looking 20 years older than I am.  To my amazement I received another email stating they understood and to just include photos of my family! Yay  happy day!!!!!!!!! Yes I am proud to show off my family!  So my day began with converting my crock pot recipe to a casserole recipe, getting hat in the oven, realizing I needed to bake biscuits because truly breakfast would not be complete without fresh biscuits and homemade spiced peach preserves, waking kids up to get chores done, scrambling between chores and the oven (yes visions of burning the entire thing crossed my mind 200 times a minute), getting little girls hair brushed all three kids faces washed, checking goats to see if any were going to kid during the next hour I was attempting to get photos of the prepared recipe and convince both Mike and Fred that it is entirely possible to smile BEFORE the first pot of coffee and sunrise hits!  Well we made it and completed the photos so they can be sent before the deadline!!!!! 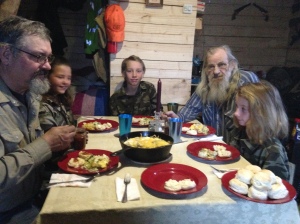 Photo session completed we all finished breakfast and it was time to begin our school day.  While kids worked on math and science I did up dishes and mixed up bread for French bread, ran out and finished up the chores and came back to Charlotte and Jazzy who ad just discovered that they were,,,,um….different!  Alright maybe I can explain it a bit better. Jazzy discovered Charlotte is a girl with girl parts and he is a boy with boy parts but not quite how the boy parts are supposed to fit the girl parts when the boy is 3 inches shorter in height. Hmmmm, not be deterred it was simply a matter of finding a shallow spot for Charlotte to stand in while Jazzy stretched as far as e could to attempt to get the job done.  He would have if Charlotte (who as more than willing) would have known where to put her tail.  At this point a little help was needed so I gently pulled her tail out of the way but seriously Mike did not have to laugh so loud!   Any way we shall see if she goes back into heat in 18-21 days maybe we will need to build little Jazzy a step stool or something.

So, here we are day almost completed its once again time to do chores-still no goat babies but everyone got fed and the required amount of scratching time, cookies baked,  supper in the oven, french  bread baked and cooling. The snow was falling and the kids were running and playing in the snow with my sidekick Missy the wonder dog I realized life may be hectic but it is so good! I sometimes feel like this is all a dream and yes I pinch myself and then Thank God for this crazy hectic life that he has blessed me with.