The sunshine has been abundant lately save for a scattered shower that snuck up on us today. Dear hubby has been doing some welding as he awaits the opening of halibut season. For months he’s paced in anticipation only to be held back by a delayed opening date-thank heavens it will be soon as he’s like a kid waiting for Christmas.

I, poppa Fred and the kiddos have busied ourselves with the routine chores like cooking pig food, keeping the others well fed, cleaning pens which is never ending and building a new greenhouse. Of course there is still the schoolwork to complete but it’s amazing how quickly they can complete lessons when the outdoors is calling. Cati however has busied herself by taking over the baking and that’s perfectly fine with me. At 11 years old she is very adept at bread and cake baking which frees me to do other things. 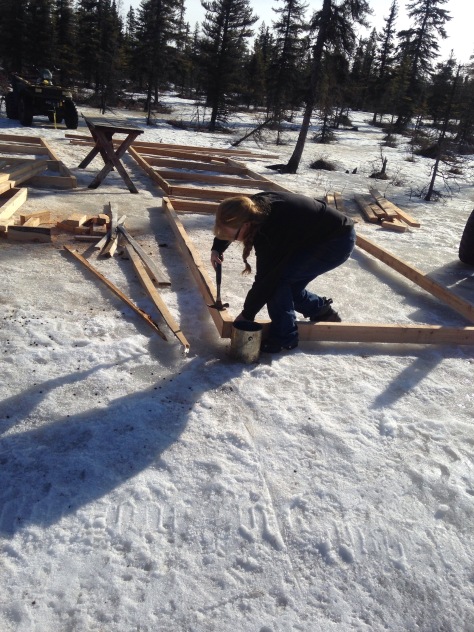 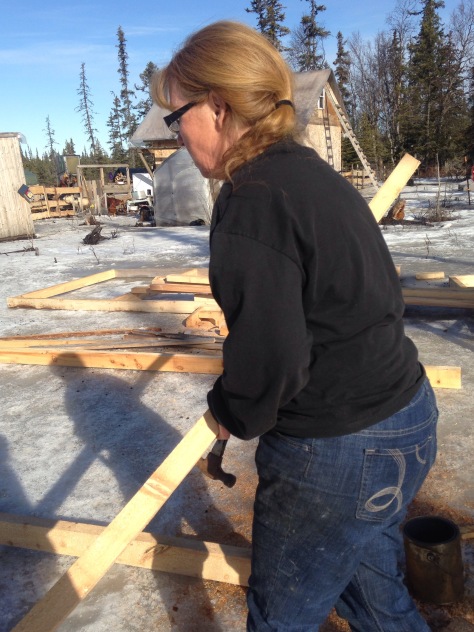 We ran out of lumber for the greenhouse so the plan today was to run the sawmill but it was short lived. By the time all the other chores were completed it was 2p.m. 30 minutes into getting the mill ready and running a single log it started to rain and then sleet. By the time we made it back to the cabin we were soaked. 2 hours later the rain subsided but it was time to get the evening chores started and get supper on.

Cati baked rolls , a cake and boiled the chicken down and shredded it while I finished splitting wood and cooking the pig food. I did have time to toss the ingredients in a pan for barbque sauce and tell her to keep an eye on it and get a pasta dish whipped up. Yes it was a crazy busy day but by the time dear hubby got home at 6:30 chores were done, supper was ready and I was more than ready to put up my feet. I started my day 13 hours prior and I was pooped!  I had to run back out and take a few pics of goats for a lady but I’m happy to say 2 of our young kids will be going to a new home next week.tomorrow the one that is a little he will be made into an it. Not my favorite thing to do but while my knife is sharp I might as well do the 4 little boy pigs too. Oh the life of a homesteader-it is never boring. 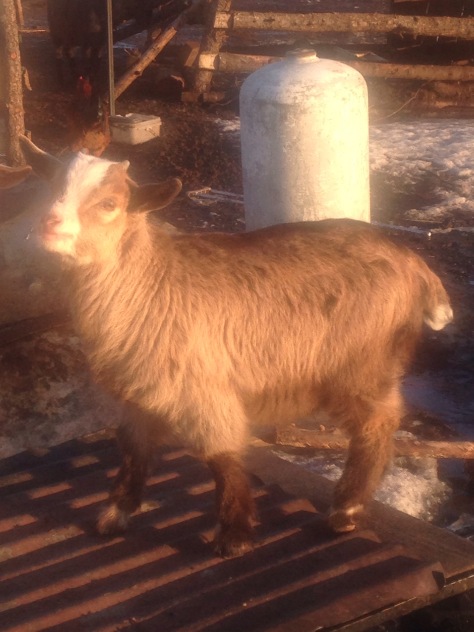 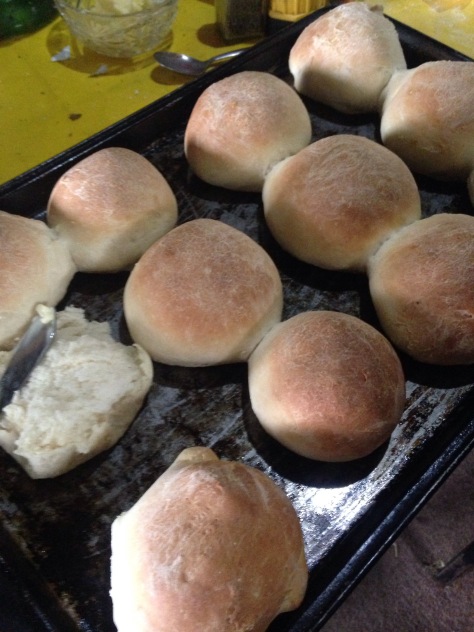 Today was not one of my better days in the grace department either. While cooking the pig food-in an old bathtub outside-I got my feet tangled up in the chickens looking for a handout and started falling towards the now boiling water. Trying to avoid a hot bath I grabbed for a goat who was also trying to get to the pig food, the goat was more than helpful. I somehow managed to get my hand under the collar and at the same time my feet left the ground I was hung up on the goat which my nose soon told me was Henry one of the billies. Henry not knowing what to think about me laying over his back with my feet in the air and arm through his collar decides to go site seeing. Of course he didn’t want to slip on the ice so took the muddy way around the farm yard and more than once stepped on my braid hanging down before I finally wedged my lower body against a tree to get him to stop. Finding my footing I dislodged my arm from his collar, rung my braid out, wiped off as much of the mud as I could and decided it was time for a coffee break. Cami came around the corner about the time I hit the cabin steps and followed me in. Not taking note of my appearance at all she asks “what stinks” with a “duh” look on my face she says “it smells like a Billie goat in here”. I could not bring myself to run through what had just happened so I played dumb and said I didn’t smell a thing. I did go out and wash up some but it took a change of clothes to get his heady scent off of me.

All in a days work I keep telling myself. Without the little mishaps life would be so boring!

Have a blessed night all. I’ve got my supermom cape ready and I’m off for another adventure tomorrow-stay tuned!

2 thoughts on “Super mom cape is on and I’m ready!”