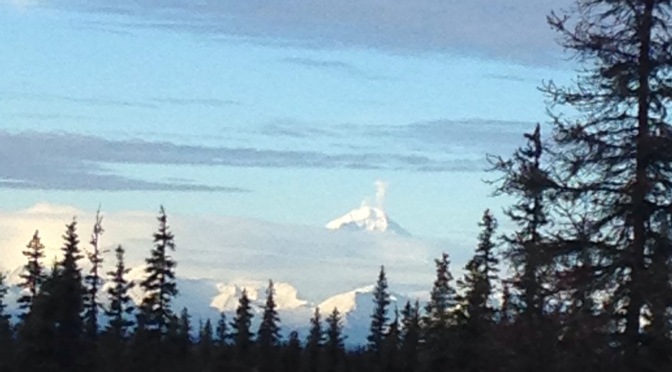 There are days when I feel like super woman, well alright maybe not superwoman perhaps super mom. Thank heavens my apron quickly converts to my MOM cape for emergencies like today. While fixing breakfast (yes I’m a redneck so we “fix” breakfast) I hear a goat holler. Now for those of you who have never been around goats they are much like kids. You can just tell when a normal blabber or bleat in this case is not just a “I want attention” but instead is more like a “I’ve got myself in big trouble please come quick”. So back to the goat hollering, I just knew this was a hurry up situation and began following the cries for help. Sure enough Bandit had thought it would be a great idea to steal from the piggy dish by sticking her head through a 4 inch gap in the boards. Well now this may not have been an issue except for a couple crucial things she didn’t account for. First off her horn spread is 6 inches, secondly there are 5 pigs in the pen she chose who haven’t yet tasted goat but are willing to eat everything placed in their dishes including a goat head attached to a much alive goat. The only thing that stopped them was their curiosity at the loud bellering going on. Now mind you I’m still in my pajamas, I pulled on my work boots quickly before running outside but other than that I was not prepared to be in a pig pen full of muck. With a quick swish of the mom cape I got in the pig pen which of course made said piggies curious as to why I was in there fiddling with a goats head and now it was I-not the goat who was bellering. Yep, I was in over my head and needed help so I started hollering for dear hubby, hollering at the pigs to get their snouts out of my ears and hair and hollering because they thought it was the perfect time to jump, splash and play with mom. Once dear hubby got there he was worried about saving me from the pigs but as I quickly explained, well alright screeched-he understood they were just curious and playing not attacking me so back to the black goat who was once again bellering at the top of her lungs to be freed. I grabbed her nose and horns and started twisting when I finally had her lined up to exit I told him to pull and she was free. She was a bit scraped up but no serious injuries and we were both covered head to toe with pig muck. Wiping off as best as I could with the “mom cape” I then washed up a bit in an icy water hole before going in and taking the wonderful pig aroma with me. Of course dear son wakes up just as I’m coming in the door and asks why I smell like a wet goat covered in pig poop-of course I replied “new beauty regime” discussion over!

Once cleaned up and breakfast finished-homemade cake donuts take awhile-I decided that due to the recent events coupled with the fact I had little sleep because my dear hubby was trying to call in every bear, moose and wolf in his sleep by imitating a logger with a chainsaw-yes he snores that loudly-I was well prepared to take the day off and crawl back in bed. Right! Best laid plans! I then remembered I had the cow tongue chilling that I cooked day before and I needed to peel and grind, a turkey that was in the smoker awaiting it’s cooking to finish,beef bones to simmer ( the tongue and bones were given to me when a friend butchered a cow) and a list 2 arm lengths long of things that needed done like pig food to cook, kids school work and pens to inspect, clean etc.

by 1 p.m. I had finished with the dishes, splitting wood as I was running low (yes there’s wood in the shed but that’s for rainy days) hubby and kids just returned from cutting straw for all the pens so were all hungry. A quick sandwich of cows tongue made all happy, turkey was in the oven, bones simmering, now it was time to turn my attention to the critter pens while running back and forth to the cabin to keep the fire stoked and watch so the turkey nor the pig food cooking would burn. I do believe I ran just short of a 5k by this time.

4 p.m. Coffee break time! As I sneak in to have a quick cup in the quiet I almost made it to the door when my dog starts whining. Mr. Tom T.Turkey has her cornered and is once again trying to woo her. I save her from the amorous turkey by picking him up as he calls out his love gobbles while she makes a bee line to the cabin. Thinking of her making a bee line reminded me I needed to check my bee hives and in my tired state I almost opened them up without my gear on. There’s buzzing in the boxes so I let them be and hopefully will have a few minutes tomorrow to get them some food to carry them through until the thaw.

Back to my coffee break! By this time I’m on a mission! As I head back to the cabin the twin goat babies are crying for momma who has left them to go graze while they were napping and now we’re up and hungry. Not wanting an eagle or bear to hear the commotion I scoop up one under each arm and drag them back to the cabin and plop them down with Missy the wonder dog who begins giving them a tongue bath which makes them quite happy as she is their second momma, I cut myself a cup of coffee-by this time it was almost that strong from sitting on the stove perking away while I chased critters and my own tail around and realized third sip in that supper needed fixing.

By 8 p.m. Supper done, another batch of pig food done for morning, dishes washed and it’s time to call it a day. Yep, just another quiet day on Two Moose Farm!

I’ll leave you with a few random pics as is my norm and a a prayer to God to provide for your every need. God Bless All 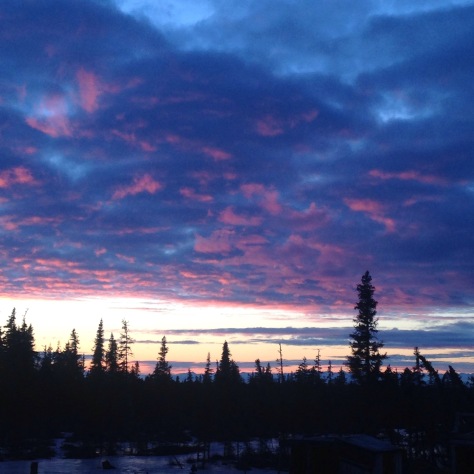 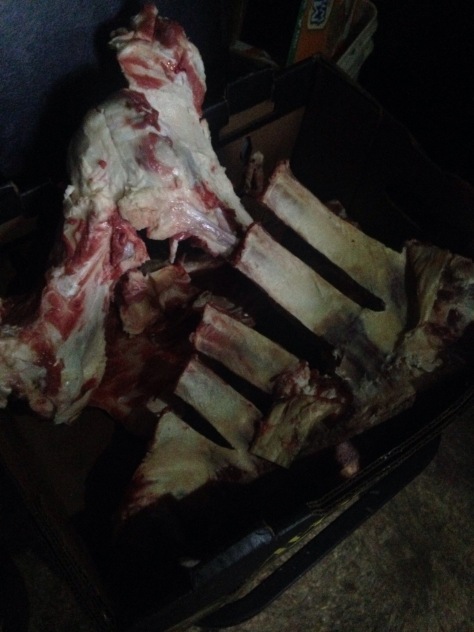 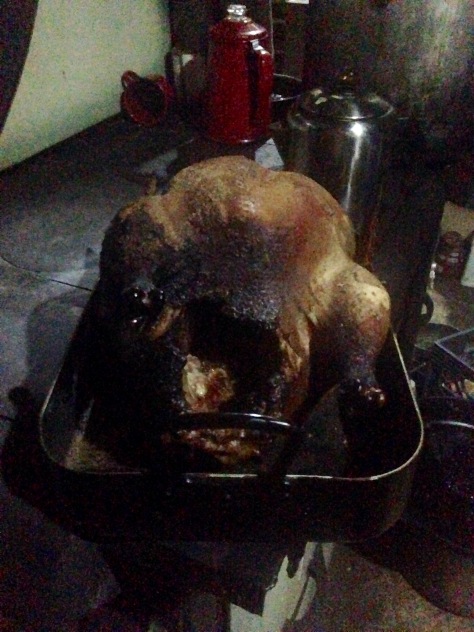 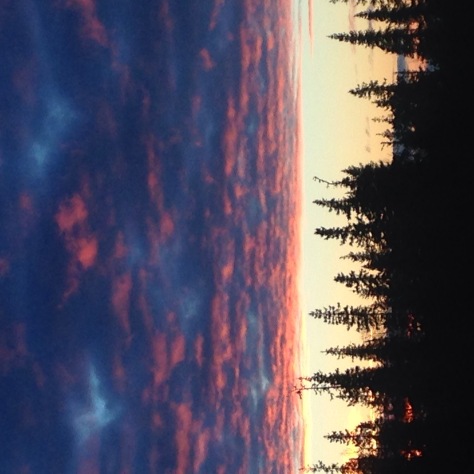 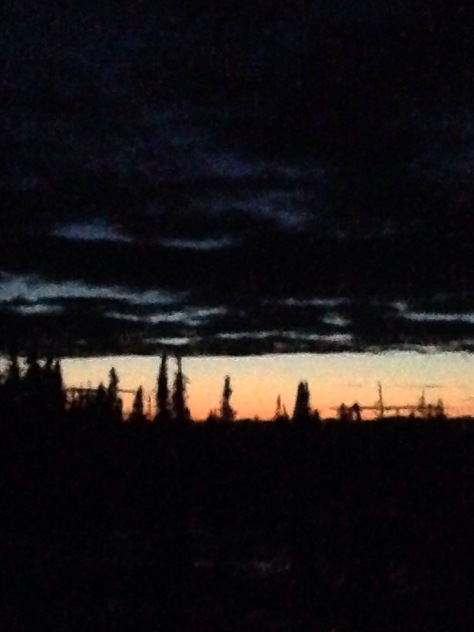 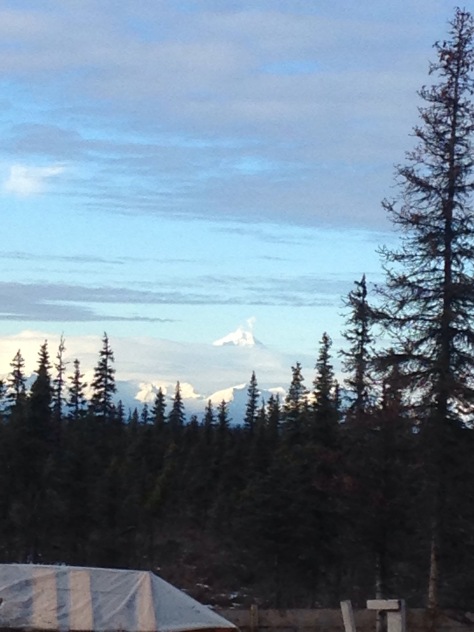 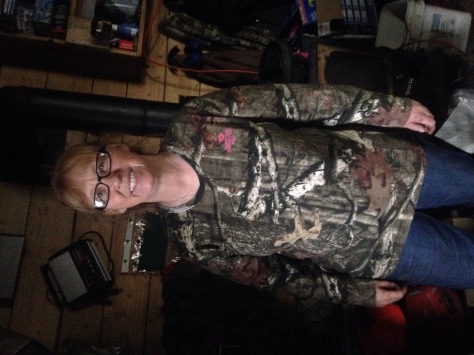