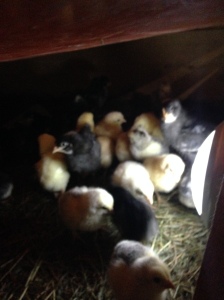 Today was definitely one of those crazy days where I met myself coming and going.  The arrival of baby chicks at 6:30 a.m. means rising at least an hour earlier in order to be ready and get out to the truck to get to town and pick them up.  This is our fourth attempt and sadly I must report every one of the Barred Rock pullets arrived dead but the 25 assorted chicks 22 of those survived and are quite healthy.  I called the poultry producer immediately and was assured they would look into it and would make good on them.  Truly I have no fear that Ideal poultry won’t make good as they always do and the company has impeccable customer service but as I stated to them there may be something that requires a further investigation.  I am however very happy with the chicks that survived as the came out of the box on a run and went right to eating and drinking. 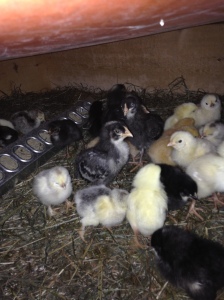 The non electric brooder is working well and praying the chicks continue to thrive.

After getting the chicks settled in I began making taps for the upcoming birch sap run.  They are not difficult to make just time-consuming.  After gathering he willows (dear hubby did this for me) I cut them in 5 inch sections beveling one end. They are then stripped of the bark and a hole drilled through them.  Not much to it but when it takes 30 minutes to carefully do this so as not to drill through the side making 50 of them seems like a daunting task.  I completed 4 today before I had to quit and get chores started again. 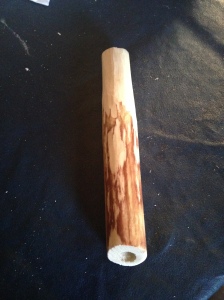 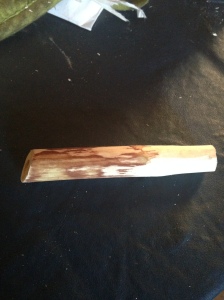 Many may question why I am making my taps when they can be ordered for a few dollars each but multiply that few dollars by 50 it adds up quickly.   There is a certain satisfaction from doing things old school.  After all there are very few people in this fast paced world who want to bother with making birch syrup as it takes at least 50 gallons of sap to make 1 gallon of syrup but once you taste it you will see why it is so special and if I am going to spend that much energy collecting organic sap to make organic syrup I don’t think I want to use plastic taps made from petroleum products to gather the sap with. I  am teaching my children the old ways, before our world became a disposable society.  Preserving these ways for future generations is an important part of history I want to keep alive.  My kids helped with the first taps today and will be a part of each step from tapping the trees, gathering the sap, cooking down and bottling.

Hope you all are living your dreams and pray that you are blessed beyond measure.