The last day of 2014 brought a new life to us here on Two Moose Farm. Our goat known as Bubbles Jr. aka Princess gave birth to a healthy and quite large baby boy. Of course this particular goat has been a challenge for months as she was injured by an overly amorous buck and has been babied all winter. Her birthing today was not an easy one as the kid had a leg back and as I said was quite large but I am happy to report he is healthy, quite active and very vocal. As some of you know my friend Shana gifted some of the goats to me in the beginning so was quite excited to hear about this birth as the momma was one of her own babies and I bestowed the honor of naming him to her. The name she chose was Racer as he has a racing stripe down his back-I do hope this is not a sign of things to come. 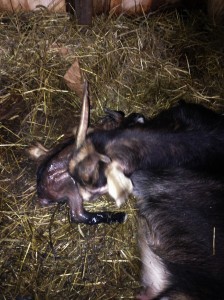 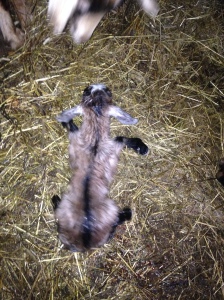 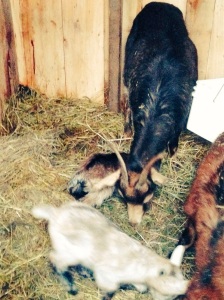 Shana’s daughter Melissa has requested the next female born be called Illiamna after the volcano across the bay and I decided that would be a great name and we will call her Illy but to make the rest of the season fun for all after little Illy makes her appearance we will have a contest where the winner will be the one to name the next baby. I haven’t worked out the details but will keep you all informed. Goat babies are so much fun!

The New Year rang in about 40 minutes ago and for once I am awake but yet was so busy checking critters I missed it. Happy New Year’s everyone!!!! I have to say though I did spend it with some of my favorite souls even though they are four legged.

We have had three days of rain and it totaled just over 5 inches, the ice is rapidly melting and my husband reported the creek is out of its banks and the water level is nearing the bridge. Such an odd thing to have in the last days of December but I will not let this get me down as the years to come I am sure will make up for the missed snow this year.

Dear hubby got my freezer in today and I will get it placed and well insulated then run it until I have water bottles frozen solid then an hour or so every couple of days to keep it frozen. I debated for a long time on doing this but with gas prices falling I will indulge myself the use of the generator and freezer for a while until prices once again begin to rise and then I will can whatever meats are left. I am hoping to butcher a pig next month as I am wanting to make sausage and I have several more rabbits and chickens that will need to go to freezer camp as well.

I feel silly telling this story but in retrospect it is funny so I will share it with you. As most of you know we are remote-no roads and a not so great trail coming in but town is literally just a few miles away as the crow flies. Tonight fireworks were being set off and we could see them in the distance which was very pretty but on my nightly rounds I kept seeing bright red lights that appeared to be getting closer. I then realized they were slowly falling out of the sky-My imagination went into overdrive, as it has a tendency to do when I have been awake for countless hours fretting over what still needs to be done and I nervously called hubby out to see the “invasion”. After he had a good chuckle he informed me they were simply fireworks that go up in the air, release a parachute and then float down to the ground. What a relief that was and yes I do believe I have watched both the old and remake of “Red Dawn” one or three times too many now.

With that I bid you all good night and say farewell 2014. It’s been a good year and I am sure 2015 will be just as blessed. Praying bountiful blessings to all both near and far away in the New Year ahead.